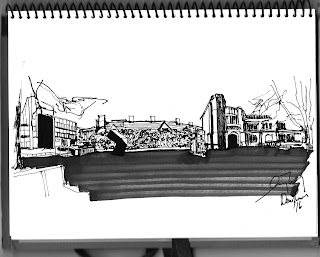 One can appreciate how concrete can cause a great deal of undescribed feelings within spatial areas at the Yale University Museum. I think that Louis Kahn was truly talented to use materiality upon forms, especially mass and heavy forms. We can even envision his works as “monumental beyond modernism.” This sketch, which was from an old photo, was of Yale University’s Museum from the courtyard. As the art gallery is the oldest university art museum in the western hemisphere,  it has a great deal of precious pieces over there. The museum has ben collecting them since 1832. It was truly a good time with one of my cousins, also a graduate student of architecture, until we heard students getting rowdy in the pitch black New Haven streets